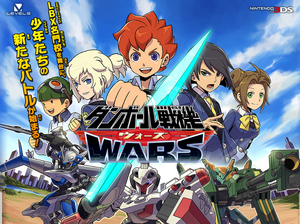 Danball Senki Wars (ダンボール戦機ウォーズ) is the new series of Danball Senki, that is set after the W series. It premiered on the 3rd of April, 2013.

"The year is 2055. Small robots the size of one’s hand called “LBXs” are the world’s greatest hobby, and they affect even the world of business. In this age, they hold an influence so great that a pro league was established around them."

"The LBXs’ battlefield used to be in a futuristic box that could absorb virtually any shock; the reinforced cardboard." Because they fought within the cardboard, they came to be called “Cardboard Warriors."

"Kamui Daimon Comprehensive Academy. The famously regarded sacred ground for all LBX players, and the only training facility available to them in the world."

"After fulfilling its demanding entrance requirements, a boy named Sena Arata finally transfers into the school. There, he meets Hoshihara Hikaru, a transfer student like him. With hopes held high, Arata finds that hidden beneath the campus is a huge ~10km wide diorama called the Second World… and that, as a special school rule, world war simulations called “War Time” were being carried out in that diorama."

"Arata and Hikaru were assigned to the 1st Platoon, a team commanded by the class president, Izumo Haruki. In this team, they fight as soldiers for the imaginary country called Jenock."

"What is the unpredictable secret the school is holding? What sort of evil is creeping up behind the boys? The battle connected to a grand future begins now!"

"These LBXs’ designs are strongly military-based, a completely different concept! Rushing about the Second World are these new-born LBXs!"

"Off the shores of Japan lies a manmade island called Kamui Island… In contrast with the old, circa 1960s cityscape that surrounds it, stands a single conspicuously modern building. That building is the school that Arata attends, Kamui Daimon International School! It’s the only training facility in the world for the greatest LBX players and mechanics. Admissions requirements are strict, and students must place first in at least three official tournaments before attending."

"Underneath Kamui Daimon Comprehensive Academy lies a huge diorama that spans approximately 10 kilometers. It’s a completely accurate scale model of the Earth’s surface. When War Time begins, the ceiling projects a hologram to create the image of a false sky. Here, replica automobiles run down city streets, and most other models carry out the same functions as their real world equivalents. A daylight simulator controls the passage of time here, and can even recreate natural phenomena such as rain and storms, making it extremely similar to the real world." 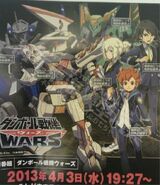 First known picture to be released.

Main Characters.
Add a photo to this gallery

Retrieved from "https://danball-senki.fandom.com/wiki/Danball_Senki_Wars_(anime)?oldid=61908"
Community content is available under CC-BY-SA unless otherwise noted.